Piers Corbyn, the man who has successfully forecast, weeks or even months ahead, much of this summer's extreme weather events, has issued a warning of further heavy rainfall on 5th-9th and 18th-23rd August. He also warns that there is a serious risk of flooding in London, as the floodwater from this rainfall hits the spring tides of 12th and 28th August. 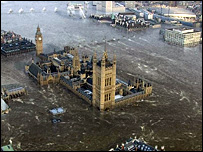 I have no idea about the conditions required to cause flooding in London. We are often told (for instance by Ken Livingstone only this week in questions on the Olympics) that London is protected from flooding for at least the next fifty years by the Thames barrage. But given Piers's record (he was bang on with the rains of 12th-14th June and those of 24th-26th June, which caused the Sheffield and Hull flooding, but was out by two days in forecasting the recent heavy rain for 22nd-26th July, when it actually fell mostly during the period 20th-23rd July), and the less impressive record of the Government and the Met. Office, I would be inclined to take at least the weather forecast part seriously, and to ask questions of the Environment Agency about whether the conditions he forecast could really result in serious flooding in London.

The economic consequences, if Piers is correct, could be significant. He has written to Gordon Brown to warn him. We'll see whether the Government will take the threat more seriously this time, and take more decisive action to put preventative and rescue measures in place.

Meanwhile, on the other side of the Atlantic, we are well into Hurricane Season, which officially begins on 1st June. So far, it seems to have been a pretty quiet one, though one wouldn't expect the big storms yet - they tend to be concentrated between August and October. The Season Outlook issued by the National Oceanic and Atmospheric Administration (NOAA) at the end of May warns that it is very likely (75% probability) to be an above-normal hurricane season. This is not, as will doubtless be claimed if the Outlook turns out to be right, because of global warming, but because of "1) the continuation of conditions that have been conducive to above-normal Atlantic hurricane seasons since 1995, and 2) the strong likelihood of either ENSO-neutral or La Niña conditions in the tropical Pacific Ocean." As La Niña conditions have been fingered for our bad weather, it looks like that part of the forecast has been fulfilled, which was expected to lead to more extreme events than if there had been ENSO-neutral conditions.

All-in-all, it looks like this year could be a humdinger of a hurricane season, if the US government agency's models are right. It's always possible that the weather confounds the models, or that the models are wrong. Even if not, the agency is keen to point out that the scale of damage is not necessarily proportional to the activity of the season, as the precise paths of the hurricanes are an important factor in the scale of damage, and these paths cannot be predicted accurately. But it's yet one more risk of a high-cost weather event.

It must already be a pretty bad summer for insurers, given that southern Europe is experiencing its own extreme weather, Eastern India is under water, Japan has been hit by the strongest typhoon on record for a July, while in China, they seem to be managing to have floods and droughts almost simultaneously. If either or both of these threats - flooding in London, or a hurricane-strike on another major American city - occur, it could cause significant difficulties for the insurance industry. And any circumstance where high payouts are a risk can only mean one thing - higher premiums. It's just one more thing to add to the ongoing squeeze on the budgets of most households and businesses nowadays.