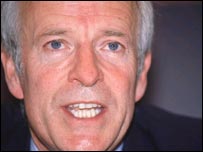 Fingers have been pointed in the direction of many different culprits for the critical condition of our economy. I am surprised that they have not been pointed more frequently at Sir Callum McCarthy. We don't need to swab him for gunshot residue; he is spattered in blood, holding a smoking gun.

Two things in particular have made life particularly difficult for people in the past 18 months: energy prices that shot up as world prices went up and then failed to come down at the same rate, and unavailability of credit because of the failure of our financial systems. Of course, Callamity was not totally responsible for either. But he was at the scene of the crime with blood on his hands for both.

The speed at which energy prices rise and sloth with which they fall is a sign of an uncompetitive market. So is massive profit-expansion when costs are rising.

There is a reason why our energy markets are uncompetitive. When electricity was privatised, the Conservative government deliberately separated the generation businesses from the supply and distribution businesses (the Regional Electricity Companies, or RECs). It was essential to creating a liquid trading market for electricity. If suppliers generate most of their own electricity, only marginal production is traded in the markets. That leaves independent generators selling at a disadvantage, when their customers are also their competitors. And the same goes for independent suppliers, who must buy electricity from their competitors.

Early regulators under the Conservative government recognised this, and protected this separation against pressure from the industry, who would like nothing more than to get back to their cozy, lazy, nationalised ways. But from 1998, the regulator began to allow acquisitions that created combined supply, generation and distribution businesses. By 2004, none of the RECs remained independent. All had been subsumed within one or other of the Big Six - the Vertically-Integrated Large Energy (VILE) companies.

In September 1998, Clare Spottiswoode and Stephen Littlechild stood down from their jobs as regulators of (respectively) gas and electricity. Callamity took over, first at Ofgas, and then at the merged regulator of gas and electricity, Ofgem. The extent of his responsibility (and ego) can be seen in the fact that, from 2000, he was acting as both Chairman and Chief Executive of Ofgem.

Efficiencies drive down costs. Competition drives down prices. The mergers allowed by McCarthy destroyed competition. Little wonder that, by 2003, the National Audit Office (under Sir John Bourne) was reporting that the market changes enacted under Labour (many of them improvements on the original design from privatisation) had driven down wholesale prices, but had had much less effect on retail prices. Through his naivety, Callamity undid the benefits of the market improvements, and created the uncompetitive oligopoly from which we suffer.

Repeated attempts since then by the regulator, the competition authorities and the government to identify collusion between the Big Six have failed, because the problem is not underhand behaviour, but the market-power provided by their vertical-integration, which allows them to lock out competitors and maintain juicy profits, without having to literally sit down in a room and parcel out the market between them. It is obvious there is a problem, but no one dares acknowledge that the only solution is to reverse McCarthy's mistake: disintegrate the VILE companies.

In September 2003, Callamity left Ofgem and became Chairman of the Financial Services Authority (FSA). What happened next is common knowledge. The financial services industry engaged increasingly in imprudent activities, prompted by various government measures, and unconstrained by any regulatory action, even as they moved more and more risk off-balance-sheet. An excellent analysis of the development of the problems - "How Not to Solve a Crisis" has been produced by Bill Stacey of the Lion Rock Institute and Julian Morris of the International Policy Network. When eventually the economy could no longer stand all the systemic imbalances that had been allowed to develop, the necessary correction revealed the extent to which Callamity had allowed short-termism and corporate interests in another industry to take priority over good governance.

Callamity's story gives the lie to Gordon's claim that Britain is a victim of global forces and American failings. Britain led the race to the bottom of regulatory supervision. What does Gordon think drove the American government to repeal Glass-Steagall, other than the inability of Wall Street to compete with the lax conditions in the City of London? Wall Street's shackles having been thus loosened in 1999, it would take a regulator of quite stupendous incompetence and lassitude to keep the City ahead in the race. In Callamity, Gordon had just the man for the job. No wonder Callamity had to be quietly shuffled out of his role, as the consequences of his reign became clearer. His continued presence would be a clearer reminder than Sir Fred Goodwin's pension of who is really to blame for our woes.

In another era, Callamity would have been left in a room with a whisky and a loaded pistol. Earlier still, his neck would be on the block. We ought to find some similar punishment for him. But what do you want to bet, if politicians are now sensible enough to keep him away from any further public-sector work, that Callamity can look forward to some well-remunerated Non-Exec positions from his corporate friends? Or would even they be too embarrassed to be seen around him?